Happy New Year to all who tune in here. I hope this new year is a fabulous one for everyone.

Anyway, today is New Year's Eve. As is usual in New England the weather decided to be somewhat contrary. We received about 10" of the nice white fluffy stuff. The driving from Boston wasn't too bad since most folks took the day off. Once I cleared northern Worcester County it was clear sailing all the way. Of course, I arrived at the Rolling J Farm, dumped my stuff and since it was late in the day I went off with the cameras to see if sunset would try to match Sunday's show. It wasn't quite as spectacular, but was pretty nice. My feet were really cold by the time I got back to the truck and headed home. Here's an HDR image from an overlook of the Deerfield River in the misnamed Florida, MA. 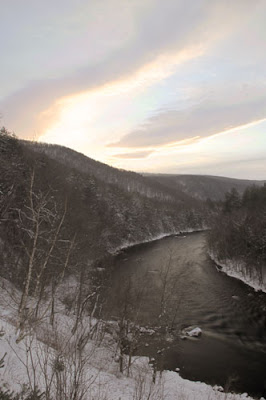 Exceptions to the Rule

OK, so not every image taken this time of year NEEDS to be converted to black and white. I was on my way back home (the eastern home) on Sunday afternoon. For the most part it was a very warm (for December) but overcast day . The warm air over the snow was producing fog here and there, so I figured that this would be the order of the day. Foggy fields and woods with just a hint of the hills in the background and possibly godbeams from a hole in the clouds should yield something interesting, in either color or B&W.
A Field Above Shelburne, MA 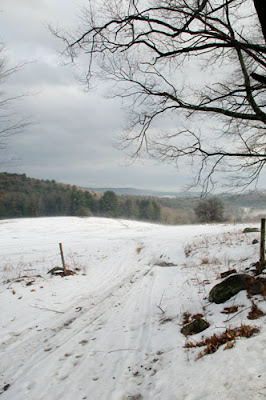 I drove around a bit, but had an idea where I wanted to go for the end of the day: Priest Brook in Royalston, MA. But I left a bit later than I should have for that particular location, so I gassed up the truck and continued eastward. On my way I decided to drive long Rt 122, which parallels the Quabbin watershed for about 10 miles. I stopped at a boggy area and got out to survey the possibilities. I found a decent place to pull over and wandered over. I shot a number of uninspiring images and was just about to give up and just drive home when I saw it. In a big patch of overcast that I thought was so thick that no sunset could possibly burn through, patches of crimson were appearing amongst the gray of the clouds. It built and built until the sky was on fire. After my experience in the spring where I watched the most spectacular sunset in Death Valley with my cameras neatly re-packed in my pack, I vowed to wait until I was absolutely certain it was dark. I'm glad I did! 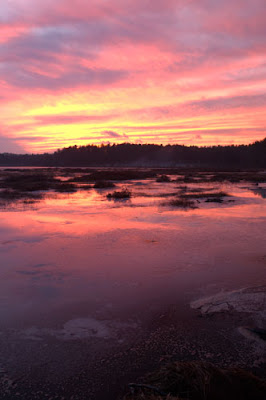 For anyone who has lived in New England any length of time, you know about the two major interseasons. I'm coining this phrase "interseason" to describe the (hopefully) short period of time between the end of autumn and the first snows and the end of snow and the fist green buds on the trees and blooming of the early wildflowers. Once the leaves have turned and fallen to the ground, the landscape becomes fairly devoid of color. The trees, once brightly adorned are now bare and a variety of grays and muted browns. The grasses are mostly brown and the hills have taken on a stark appearance in preparation of the winter to come.

What is a photographer to do? This question plagued me as I hiked into Hamilton Falls in Jamaica State Park, VT one Saturday after Thanksgiving. There was just a dusting of snow here and there along the West River. I was struggling to find a composition that would excite me and lamenting the lack of color when it struck me. Of course!!! Black and white!!! My partner shoots 4x5 black and white and the images are quite spectacular. She has been chiding me for some time to shoot black and white, but I'm a little slow.

Using a digital camera allows for such flexibility. I capture the image in color, adjust tones and colors in Photoshop and use an adjustment layer to convert to black and white. It's a non-destructive means of conversion and I have the color version, too. I am by no means very adept at this, but I'm learning. Here are a couple of images from my day in Vermont. 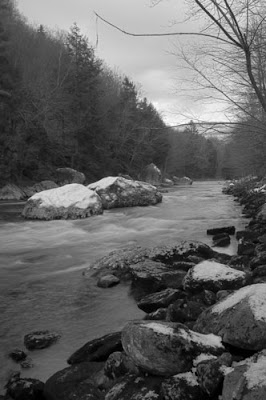 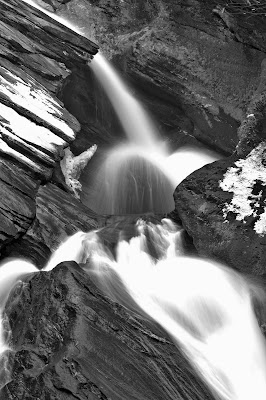 Yes, folks it's finally snowing here in the northern Berkshires. There's a good foot of snow on the ground and it's still coming down. Last week's ice storm didn't touch our old farmhouse and it was looking pretty bleak. An all brown and gray palette doesn't feel very wintry here in New England.

Yesterday the storm let up enough for me to get out with my camera so I headed up to Rowe and Pelham Brook. Of course I had to also check out the Zoar Roadcuts for climbable ice. Nothing to climb yet, but it's coming. Here are a couple of images from a very quick stop along the brook. It was getting dark and I needed to get home and stoke the stove. 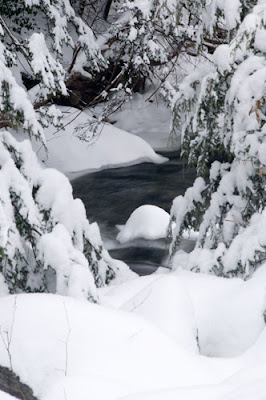 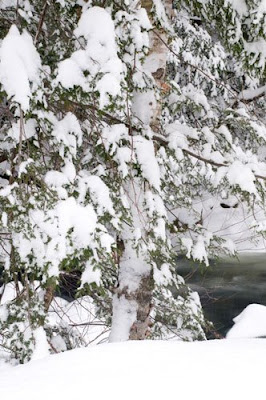 OK, so it's been pointed out to me (by more than one person) that I have been slacking on my blog. I have been out shooting a lot and my images have gone up on my website (www.lizzbartlett.com) but I have neglected this blog, which really allows me to do some commentary.

So, I'm going to try and remedy that. I really no longer have excuses. My thinking was that by the time I shot my roll(s) of film and had it/them processed and I could sort, edit, scan and process the selected images that I was waaaaaaaaaaaay past the time when I could make any appropriate comments. But I haven't shot any film since April when I got the D300. Kinda sad to see my trusty F100 languishing in the shadows. :-((

This past week produced an ice storm of epic proportions throughout New england. Our old house in western MA was unscathed but the higher elevations got hammered. Power may not be restored for nearly a week. It was however, beautiful to see and photograph. Here are a few images from the past couple of days. This very blue image is of the East Hawley Rd looking north. 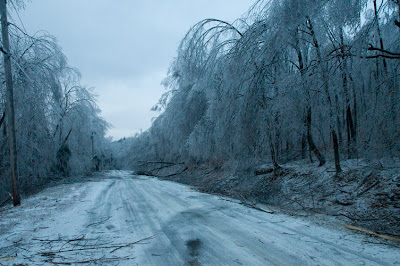 These other two are from sunset spent with TCR up in Ashfield. For those of you who read his blog, Little Bang Theory, this is what I was looking at.


Thanks for reading!
Lizz
a.k.a. Frau Biergut
Posted by Lizz Bartlett at 3:26 PM 2 comments: