Last Saturday my buddy Ralph, aka The Doctor, and I made a whirlwind trip to New Hampshire.

It began with a stop at the seashore for sunrise. Well, almost. You see, while we intended an alpine start to see if we could capture some nice images of sunrise at Odirone Point, NH, we were a bit late out the door. It was a case of the hurrier I go the behinder I get. Anyway, as I'm driving as fast as I feel comfortable I look out the side window to see flames forming in the sky. I mean absolutely gorgeous red sky and my heart began to sink because I knew that we were not going to make it. At least not how we intended.

We arrived at the water just as the sun poked over the horizon. The Doc snapped off a couple of shots, one of which was pretty nice. Fortunately the tide was out and the water calm, so I set up to take some images of the rocks with reflections. Here's the best of the lot:


After the light changed, (which was pretty darn fast!) we headed north for a hike up the Champney Falls Trail to Picher and Champney Falls. It was a bluebird day which is nice for hiking, but kinda bland for photography since there were no clouds. It was a delightful hike and there were some guys with topropes at the falls ice climbing. It was fun to watch and made me anxious to dust off my skills and get out there again. Hopefully next week!

Once we finished our walk, we headed to Rocky Gorge along the Kancamagus Highway. The Swift River was mostly frozen and there were some interesting ice sculptures along the shore and in the river itself. Here's one image that I converted to black and white.: 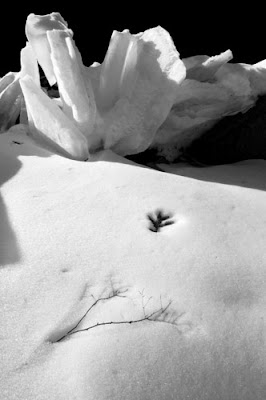 We spent a couple of hours there before heading off to the Moat Mountain Brewhouse for some sustenance before the shlep back home. All in all not a bad way to spend a winter Saturday.

Thanks for reading,
Lizz
Posted by Lizz Bartlett at 2:19 PM

That sunrise shot is gorgeous, but the B&W blows me away!

And yes, it was a helluva way to spend a Saturday. :)

Thanks for driving, Lizz.